It all began in 1925 when O’Shaughnessy Dam was constructed to provide a needed water supply to the growing city of Columbus, Ohio. Although not intended, the dam’s construction unintentionally created one of the most scenic spots within easy driving distance of the city. Shortly after its completion, Mr. Tony Nelson and Mr. Elmer Snyder obtained a lease to build a concession for soft drinks and boat rental on a spot close to the east bank, near the present site of the Columbus Zoo and Aquarium. For many, weekends soon included donning old clothes and picnic baskets and trekking to the dam.

Among these first visitors to O’Shaughnessy were sailors Charles Weeden, Walter Barks, Rae Cochran, T. L. Youmans, Frank Thurgate. Here was a perfect spot and a wonderful opportunity to pursue the life dearest to their hearts. Charles Weeden, in particular, was an old salt from Boston and saw great sailing possibilities with four miles to enjoy. In the spring of 1928 the five got together and built five 16-ft inland scow-type Marconi-rigged catboats, sailing them by mid-summer.

They soon made a deal with the concessionaires to rent meeting room space in the existing snack shack. Later they secured permission from the city to built their own clubhouse and docks. In the beginning their “clubhouse” was just a boat shed, but in 1929, with a charter membership of 15, they built a cozy one-room building complete with pot-bellied stove. Charles Weeden became the first commodore, and the name Leatherlips (from a Wyandotte Indians Chief who once used the territory as a camping grounds) was chosen. 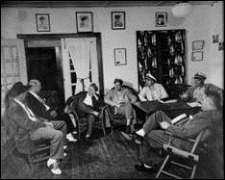 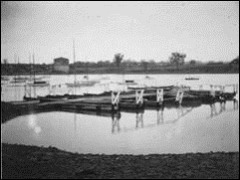 By the early 1930s LYC membership numbered in the high teens. In the beginning powerboats and sailboats were all part of the same club, but sailing finally won out. Members’ boats were anchored out in the river and reached by a homemade Jon-boat that was also used to set buoy anchors. Socializing was a large part of club activity—weekend picnics and races were standard procedure with parties scheduled on all the major holidays.

The first LYC regatta was sailed in 1931, and the first fleet, the Comets, was chartered in 1936. On May 17, 1939, the lady SQUAWS were formally organized as an auxiliary business and pleasure group consisting of the LYC women. They met during sailing months and were excellent cooks, known for providing the dinners for special club events. They also sponsored fund-raising projects. 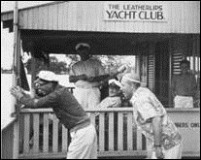 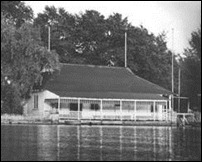 By 1940 the fleet had grown to nearly 35 sailing craft of different types. In 1941, after renting for many years, LYC incorporated and purchased the clubhouse outright. However, its relationship with the City of Columbus had been strained since 1936 due to on-going issues concerning land use, parking, access, and unsanitary facilities. In 1945, the city put flashboards on the Dam and raised the water level to flood stage—a member reported at the time that the clubhouse was almost completely underwater and that the piano was floating around. After lease negotiations with the city, the club secured a new location on the west bank on a portion of Jacob Held Farm. After fundraising, increased dues, and member donations enough money was collected to begin construction on a new clubhouse.

Groundbreaking occurred in the fall of 1947. The old clubhouse on the east bank was simultaneously torn down in order to reuse as much of the old building as possible. Old flooring was used for the now roof, old walls became new siding, and all the doors and windows were reused. Labor was provided by club members and their families. On May 30, 1948, the new clubhouse was finally dedicated. 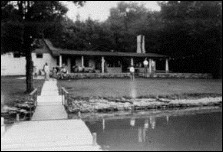 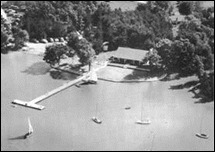 The following years saw a more organized club with increased membership, frequent meetings, fundraisers, and the incorporation of a Board of Governors to oversee club matters. A variety of committees were formed as needed. In 1950 the Thistles sponsored the first Dam Full Invitational Regatta and in 1952 LYC became a member of the North American Yacht Racing Union. A newsletter was started which eventually became the Mainsheet of today. 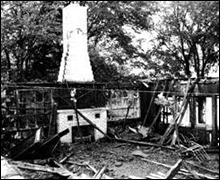 In 1958 a kitchen was added onto the clubhouse, but the improvement was short lived due to a fire ignited by a bolt of lightning. All but a small portion of the club was gutted. These were sad days but the membership rallied, drawing up new plans to repair the clubhouse. Construction was completed by 1959, and membership jumped to 145. 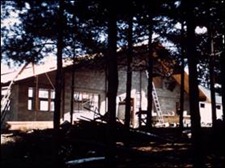 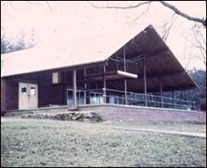 The idea of starting a formal training program was first discussed by the board in 1956. By 1960 enrollment in LYC’s junior sailing program had already grown to 32 and formal classes for women’s sailing were launched. A lady SQUAW took over the sailing program and the SQUAWs remained involved in sailing instruction until they disbanded in the early 80s due to changing times.

LYC had been experiencing a front yard shoreline erosion problem for some time, so in October of 1969 a sea wall was constructed. Preparation included pick-axing the shoreline rock to a level position then building a metal form into which concrete was poured. A crane lowered columns down to the water’s edge where club members used spud bars to inch them into place while welders tacked them together. Another crew screwed large dead-man anchors into the ground and snaked used elevator cable back and forth to create a shore anchor system. As of today this same sea wall has been in place for over 40 years! 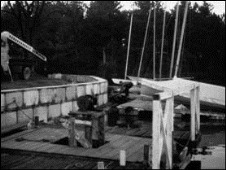 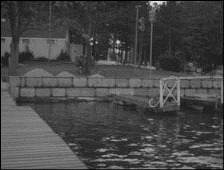 In 1977 the LYC Board of Governors allocated funds for the purchase of 14 Lasers for sailing instruction and a new fleet was born. The sailing instruction program opened to the public with classes scheduled at different times for all ages. Today LYC has graduated over 3,000 students and stands tall among Ohio yacht clubs for its well-known dedication to quality sail training. The club’s training program is also self-serving—many of its students become new members.

Over the years several sailing fleets have developed, each with its own racing schedule and outings. The Savage family, with several generations of LYC members, have an annual Savage Regatta which began as a mini-regatta on Rick and Karla’s wedding day. In 2006, the first Leukemia Cup was organized by A.J. Savage and wife Jill.

Of course there are thousands of other memories not mentioned above that make Leatherlips the great club that it is today. These include our infamous Blunder Bucket, which has been awarded to some pretty sharp sailors who goofed—and got caught. Then there’s the old spring work parties that included tarring 55–gallon floatation barrels and launching the docks on wagon wheels using a tongue and massive manpower. Or there’s the time when an old wooden barge was used as the racing committee and rescue boat. Or there’s the time when a small canon was used to start races off the front porch (later replaced by a double-barreled shotgun, later replaced by an electronic beeper). Or there’s the time when ice boats sped across the winter ice at 60 MPH. Or there’s all the championship races that produced club champions while the crowd on shore roared its approval. Or there’s the many national and international champions LYC has produced over the years.

Or there’s the simple pleasure of looking out from the front porch at a serene fleet of sailboats swaying gently at anchor. Welcome to Leatherlips!

Club History Series – Part 1
As everyone probably knows by looking at the Commodore pictures on the wall, LYC has been around for many years.

Part 1 of this series gives some insight to the projects and events that took place between 1972 and 1975.

Club History Series – Part 2
As the United States of America celebrated it’s 200th birthday, LYC continued on with sailing and planning for it’s own future.

The hope is that all members are either reminiscing about the past or learning about LYC for the first time.

LYC has a great history in the sport of sailing AND working with the surrounding communities.